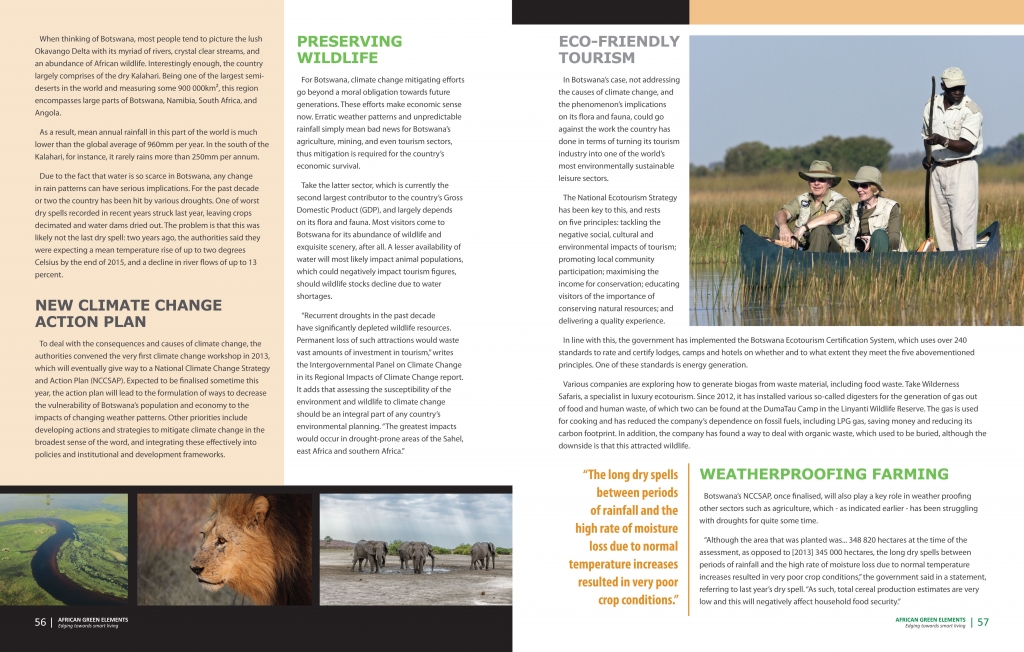 Botswana is working hard on a new climate change policy, as well as a renewable energy strategy. Like most arid regions, Africa’s oldest democracy is vulnerable to erratic and unpredictable weather patterns. 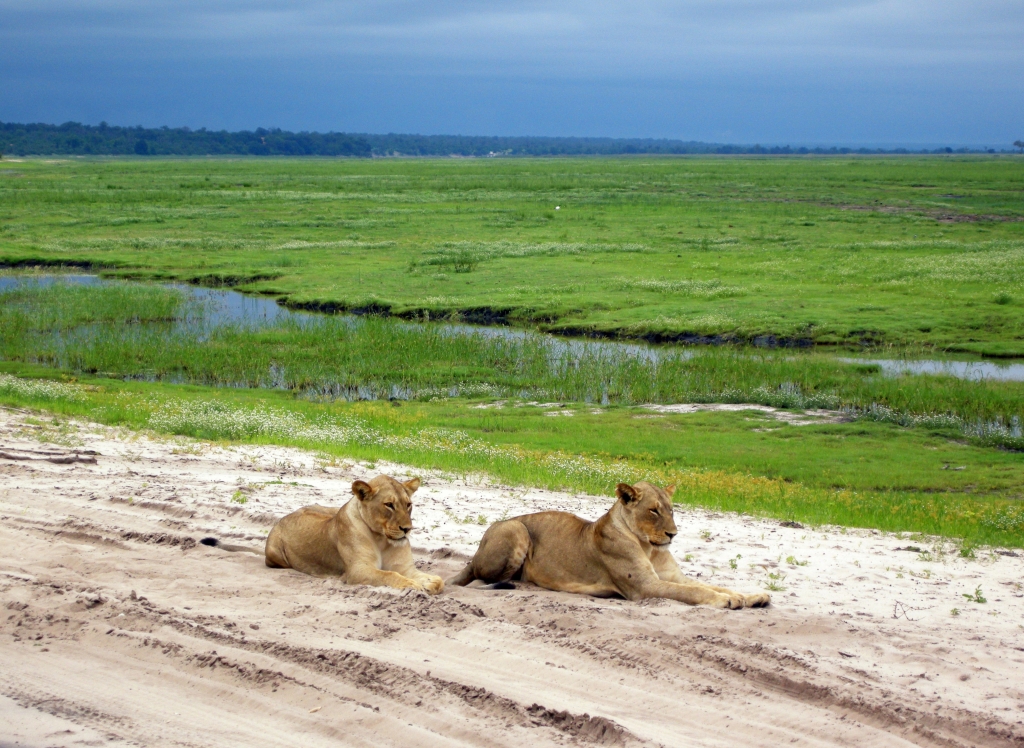 When thinking of Botswana, most people tend to picture the lush Okavango Delta with its myriad of rivers, crystal clear streams, and an abundance of African wildlife. Interestingly enough, the country largely comprises of the dry Kalahari. Being one of the largest semi-deserts in the world and measuring some 900 000km², this region encompasses large parts of Botswana, Namibia, South Africa, and Angola. As a result, mean annual rainfall in this part of the world is much lower than the global average of 960mm per year. In the south of the Kalahari, for instance, it rarely rains more than 250mm per annum. Due to the fact that water is so scarce in Botswana, any change in rain patterns can have serious implications. For the past decade or two the country has been hit by various droughts. One of worst dry spells recorded in recent years struck last year, leaving crops decimated and water dams dried out. The problem is that this was likely not the last dry spell: two years ago, the authorities said they were expecting a mean temperature rise of up to two degrees Celsius by the end of 2015, and a decline in river flows of up to 13 percent.

New climate change action plan
To deal with the consequences and causes of climate change, the authorities convened the very first climate change workshop in 2013, which will eventually give way to a National Climate Change Strategy and Action Plan (NCCSAP). Expected to be finalised sometime this year, the action plan will lead to the formulation of ways to decrease the vulnerability of Botswana’s population and economy to the impacts of changing weather patterns. Other priorities include developing actions and strategies to mitigate climate change in the broadest sense of the word, and integrating these effectively into policies and institutional and development frameworks.

Preserving wildlife
For Botswana, climate change mitigating efforts go beyond a moral obligation towards future generations. These efforts make economic sense now. Erratic weather patterns and unpredictable rainfall simply mean bad news for Botswana’s agriculture, mining, and even tourism sectors, thus mitigation is required for the country’s economic survival.
Take the latter sector, which is currently the second largest contributor to the country’s Gross Domestic Product (GDP), and largely depends on its flora and fauna. Most visitors come to Botswana for its abundance of wildlife and exquisite scenery, after all. A lesser availability of water will most likely impact animal populations, which could negatively impact tourism figures, should wildlife stocks decline due to water shortages. “Recurrent droughts in the past decade have significantly depleted wildlife resources. Permanent loss of such attractions would waste vast amounts of investment in tourism,” writes the Intergovernmental Panel on Climate Change in its Regional Impacts of Climate Change report. It adds that assessing the susceptibility of the environment and wildlife to climate change should be an integral part of any country’s environmental planning. “The greatest impacts would occur in drought-prone areas of the Sahel, east Africa and southern Africa.”

Eco-friendly tourism
In Botswana’s case, not addressing the causes of climate change, and the phenomenon’s implications on its flora and fauna, could go against the work the country has done in terms of turning its tourism industry into one of the world’s most environmentally sustainable leisure sectors. The National Ecotourism Strategy has been key to this, and rests on five principles: tackling the negative social, cultural and environmental impacts of tourism; promoting local community participation; maximising the income for conservation; educating visitors of the importance of conserving natural resources; and delivering a quality experience.
In line with this, the government has implemented the Botswana Ecotourism Certification System, which uses over 240 standards to rate and certify lodges, camps and hotels on whether and to what extent they meet the five above mentioned principles. One of these standards is energy generation.
Various companies are exploring how to generate biogas from waste material, including food waste. Take Wilderness Safaris, a specialist in luxury ecotourism. Since 2012, it has installed various so-called digesters for the generation of gas out of food and human waste, of which two can be found at the DumaTau Camp in the Linyanti Wildlife Reserve. The gas is used for cooking and has reduced the company’s dependence on fossil fuels, including LPG gas, saving money and reducing its carbon footprint. In addition, the company has found a way to deal with organic waste, which used to be buried, although the downside is that this attracted wildlife.

Weatherproofing farming
Botswana’s NCCSAP, once finalised, will also play a key role in weather proofing other sectors such as agriculture, which – as indicated earlier – has been struggling with droughts for quite some time.
“Although the area that was planted was… 348 820 hectares at the time of the assessment, as opposed to [2013] 345 000 hectares, the long dry spells between periods of rainfall and the high rate of moisture loss due to normal temperature increases resulted in very poor crop conditions,” the government said in a statement, referring to last year’s dry spell. “As such, total cereal production estimates are very low and this will negatively affect household food security.” As a result of environmental challenges, sustainable farming is on the rise in Botswana. Most of its cattle – the country boasts 2.5 to 2.8 million cows – are reared organically, being grass fed and free range.
There are a couple of sustainable farming initiatives in Botswana, including Go Fresh! By using hydroponic technologies and controlled environment greenhouses, the company aims to preserve its natural resources such as water. “We use a fraction of the water of traditional shade net and irrigated open-field farming, namely two percent”, the company says on its website. “We are also giving back to communities, and we commit 10 percent of our profits to corporate social responsibility initiatives.” The recipients are the Southern Cross Education Foundation and the Sir Ketumile Masire Foundation, of which the latter focuses on good governance, child welfare and developing agricultural innovations.

Increasing solar capacity
As part of curbing climate change whilst improving the levels of electrification, the government is looking into renewable energy. One of the sources that is being explored, apart from waste material biogas, is solar energy. As the economy develops and more Botswanans are lifted out of poverty, the demand for energy is increasing. The problem is that the country currently only has one coal fired power plant, which produces half of the country’s energy needs. The rest is imported from South Africa and is also generated from coal. Last year the authorities organised one of the first major renewable energy workshops, to which various renewable energy sector partners and stakeholders were invited. These included the World Bank, the African Development Bank, the Development Bank for Southern Africa, and representatives of the European Union. The objective of the gathering was to develop a framework to increase the role of renewables in Botswana’s energy mix, solar in particular.

According to the World Bank, the country is one of the best solar destinations in the world; Botswana receives over 3 200 hours of sunshine per year, and has one of the best average horizontal irradiation levels. This is a key parameter for the calculation of solar energy yield. Particularly the south, south west, and south east of the country are favourable in that respect.

Despite this, Botswana only counts one solar farm. The 1.3 megawatt (MW) farm, a joint project between the Botswanan and Japanese governments, was opened in 2012 as a pilot project.
This is set to change. In April this year, when answering to questions in Parliament, the Minister of Infrastructure, Science and Technology, Nonofo Molefhi – on behalf of his energy colleague – once again said that the authorities are “aware of the abundance of solar energy countrywide and that efforts were being undertaken to improve the contribution of renewable energies into the energy mix.”

Farming for the Future in Botswana
Go Fresh! situated at Langdon Organic Farms, is a technology enabled agricultural enterprise. The company’s Managing Director, Michelle Adelman, in answering our questions on her company’s business and the challenges facing agro-businesses in Botswana, gave us a glimpse of the “green agriculture” sector in this thriving Southern African state. Whilst it has its challenges, it is capable of transforming the country’s green economy.

“By growing fresh produce close to the consumer (distributed growing), we are able to increase the produce freshness and shelf-life, virtually eliminating the carbon-footprint from transportation,” says Adelman.

Use of Technology in Farming
Go Fresh uses hydroponic and controlled greenhouse technology. By doing so the company is able reduce its water consumption by 98 percent compared to irrigated field farming. The water usage is split between irrigating the plants in a very precise way (e.g. each plant is watered directly and individually) and for cooling the greenhouse. In addition, the greenhouse affluent is recycled and reused in field crops and fruit orchards.

Organic Farming
In Adelman’s view, organic farming is still at its infancy in Botswana and is a challenge. The first challenge is the lack of clear standards or guidelines for organic farming in the country, while the second is the reluctance by the consumer market to pay a premium for organic products. Organic products are more expensive to produce, because the grower has to absorb the losses associated with plant loss from pests and diseases that can only be controlled using limited, organic methods. In light of this, Go Fresh follows an Integrated Pest Management (IPM) programme rather than trying to achieve un-economic organic standards. This IPM programme focuses on the prevention of pests and diseases, the first-port of call use of organic and counter-pests to treat and prevent the spread of diseases and, only then, the prudent use of approved chemicals and sprays.

Buying Local
Since fresh produce is so challenging to grow in Botswana, high-quality, tasty, fresh vegetables have not been part of the norm in the traditional diet. However, with farming businesses such as Go Fresh and others supplying fresh produce, it is within a consumer’s ability to enjoy fresh produce without having to import these from neighbouring countries.